To introduce a detailed description of the several kinds of automatic leak test equipments under pressure, it is necessary to define some characteristics that are common to the different working principles.

Every described system has in common the necessity to create a dump or pressure difference between the area considered tight and the outside of this body.

This phase is called filling phase. 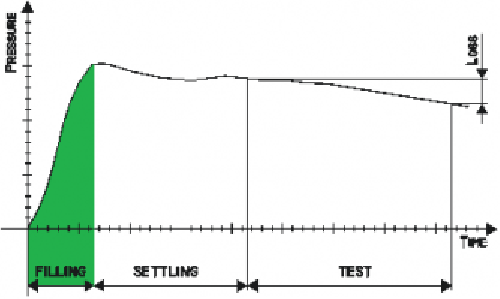 Generally the filling can be made both with positive pressure and with negative one, both with pressure (or depression) applied from the inside or from the outside of the piece under test.

After this phase we will have an settling phase, necessary to stabilize the pressure or the flow values of leak measurement. 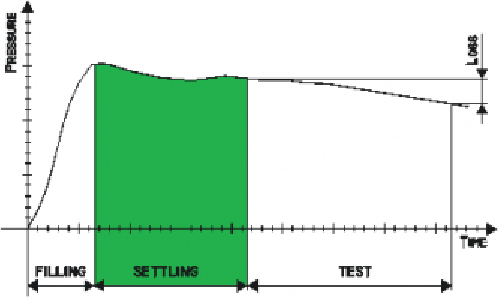 Only at the end of these two phases we will have the execution of the real leak measure, in the different strategies that we will analyze in detail. We report, to be clear, a graph with a typical trend of the pressure during a leak test (pressure decay). 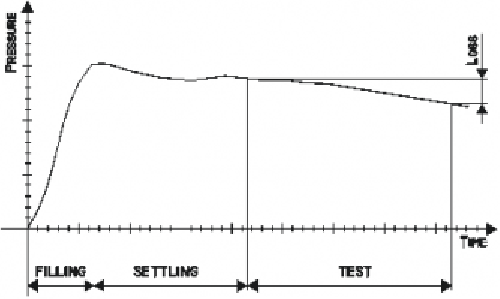 The strategy of filling, that is if it is from the inside of the piece (more general case) or from the outside (bell), the type of filling and therefore of pressure or depression and the value of this pressurization, must be selected for each case, analyzing the piece to be tested. For this selection, the first parameter we have to consider is the pressure value we have to use to make the filling, therefore the test.

Considering the use of common industrial compressed air, this value can be included in more common cases between -1 Bar and 10 Bar, and in case of leak test together with breaking or explosion test this value can arrive also over 40 Bar.

In spite of what you can assume intuitively, the use of high pressure values degrades the overall performance of the test, because if on one side the value of the leakage measured is increasing proportionally, that is, however, proportional to the pressure or flow measures, the use of high pressure complicates the trend of the filling phase and of the following settling phases or stabilization ones. Therefore, usually, it is better to prefer tests and filling made at a low pressure (less than 1 bar).

The use of a filling in depression can, for example, better the tightness of the piece during the test phases. In case of jars or of pieces with a large "open" section, for example engine oil "pan" or halves of housing, a simple soft rubber base is enough to make the piece tight, without having to use excessive contrast forces.

The filling in depression can be distorted in case of tests on pieces of plastic soldered, because the depression tends to make sticky and then to "glue" the faulty welding. In case of pieces of plastic soldered, the high pressure helps to expand the possible defect, then the test made at a pressure between 3 or 8 bars, can join to a leak test, any test of strength of the soldering. Particular attention should be placed when the piece to be tested is composed by "non-linear"" tight mechanism such as valves or leaf springs and tests have to be made or at a much lower or much higher pressure than the operating point of these valves.

On mechanical pieces such as cast iron motor housing or of motorcycle transmissions you have always to consider the presence or the absence of seals or of any components guaranteed up to a known pressure. The specifications of tests for pieces for gas and kitchen indicate the leak at low pressures, usually 150 mBar.

A very important note is for those metal pieces that are used to expand after filling phase under pressure. These pieces, such as windings, heat exchanger etc, tend to expand mechanically at the end of the filling phase, gradually according to the introduced pressure.

Considering the cases in which these elements have to be tested at a quite high pressure necessarily (4..7 Bar), and where the expansion cannot be compensated by the settling phase, only with time of prohibitive length, the use of a pre-filling at a higher value than that one of the test itself allows to obtain excellent results of expansion/relaxation, limiting the total testing time drastically.

Synthetically, the choice of the pressure value at which you have to make the test, has to be similar from one side to the real working pressure of the component, considering each time the pros and cons of different pressure levels.

The choice of a filling in "bell", and therefore form the outside of the piece, usually in depression, is discussed here below in its proper paragraph. The gas used is common to every kind of filling and it is in most cases at compressed air. This air has to be intended as a filtered one, obviously without any oil, and dehumidified.

In case you use industrial air of a general purpose circuit, the application of a cylinder or of a local expansion vessel to the leak test equipment will better the characteristics of temperature changing between the air and the piece itself. Instead of the air you can use some gas with smaller atoms, such as helium, because they increase the leak fluidity and they emphasize the sensitivity of the test.

Finally it is necessary to consider the use of inert gas such as nitrogen, in case of tests in components already treated with explosive or flammable elements, such as tests on car gasoline branches or on components for fuels generally.